Written by The Whitehouse Gallery

Joan Mirό was a 20th century artist, often considered to be the Father of Surrealism and one of the greatest artists of his time. Born in the Catalonia region of Spain, his works brought together reality and illusion, heavily inspired by early cave paintings and his own childlike imagination.

His works are still highly regarded to this day as ground-breaking feats in utilising art as a way of subverting the conventional methods of painting by asserting his uniqueness to defy the norm.

Below we explore four reasons to collect works by Joan Mirό: 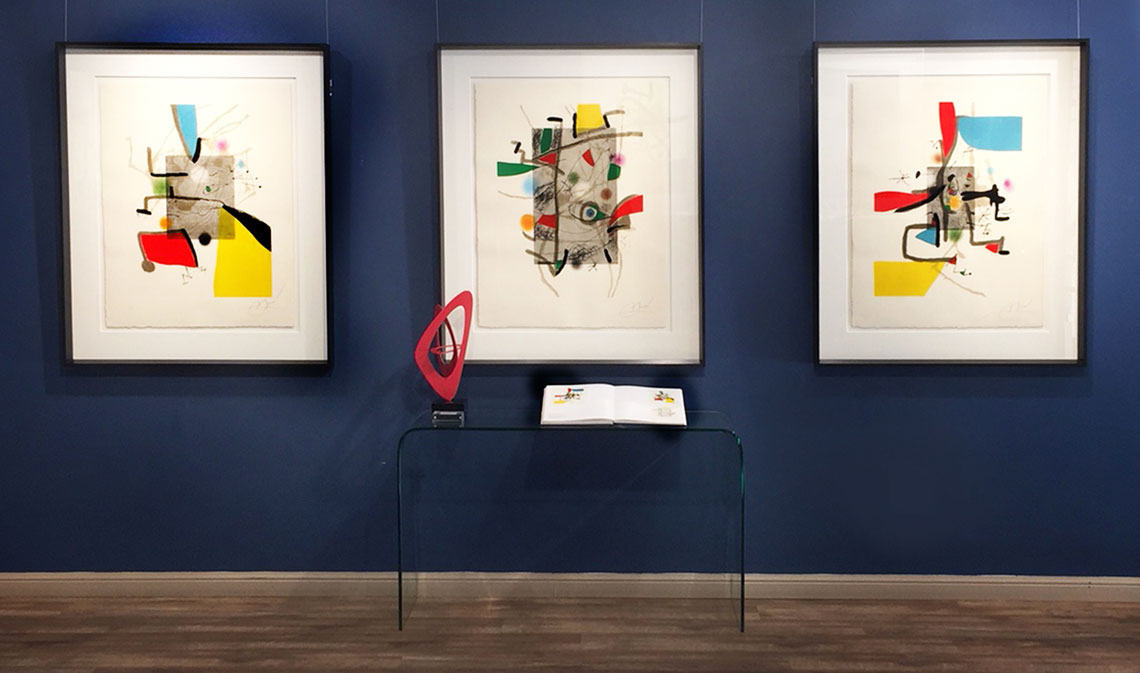 Museums and collections you would find works by Joan Mirό

Joan Mirό’s works exist as public installations, private collections and in major museums, including The Louvre where two of his paintings from Picasso’s personal collection reside. In Barcelona, Woman and Bird, Woman, and ceramic pavings and murals can be found. His ceramics, sculptures and paintings are treasured in museums and outdoors all over the world.

A testament to the achievements of Joan Mirό, and a celebration to the 100th anniversary of his birth, an exhibition depicting all of his cycles entitled Joan Mirό was appropriately held at the Museum of Modern Art (MoMA) in New York from October 17, 1993 to January 11, 1994 and another one is ongoing, named Joan Mirό: Birth of the World, set to end on July 6, 2019.

Print techniques and his printmaking

For Joan Mirό, his surrealist endeavours led him to create figures that were twisted and moving across flat surfaces, this encouraged him to experiment with a variety of techniques in order to see which ones brought his works most to life. Joan Mirό's approach to printmaking was innovative, if not groundbreaking, and he was known for combining different printmaking processes to achieve his unique compositions.

Artists and art movement that were influenced by Joan Miro

His childlike manifestations of his own subconscious, driving the movement towards abstraction, were startlingly bold and vivid. They defined how art could exist in the natural world and still be divorced from it. His name has been mentioned by a wide range of artists such as Alexander Calder, Jackson Pollock, Robert Motherwell, Arshile Gorky, William Baziotes, Mark Rothko and Helen Frankenthaler.

Joan Mirό’s works are still highly sought after and perform well at auction. His works still endure today and owning a limited edition print can be a valuable collector’s item. For example, if you bought Le sarrasin à l'étoile bleue from Sothebys in 1994 you would have paid $ 9 960.00 USD and last year Le sarrasin à l'étoile bleue fetched $ 29 985.00 USD, this means that in under 25 years the value has increased by 200%.

Similarly, in 2000 the etching and aquatint Danseuse Creole fetched $ 14 000.00 USD and more recently in 2012 this artwork achieved $ 32 500.00 USD at auction, which is an increase of 130% or a little over 10% year-on-year. It is also important to note that not only have his limited edition prints increased in value but that they often achieved prices above the auction estimates which indicates a strong demand for Joan Mirό’s work.

The potential investment growth of Joan Mirό’s artworks can only be trumped by owning a limited edition print by Joan Mirό and enjoying it hanging on your wall. Joan Mirό is a fascinating artist whose influence is still felt today. He adapted and changed throughout his career, always with a revolutionary spirit and a fiery resolve to be innovative, which led to him achieving greatness.