Patrick Rubinstein was born in Paris in 1960. At the age of 5 Patrick was introduced to gouache paint and at the age of 8 to Super 8 film. Optical illusions held an important place in the families creative output. Rubinstein’s artworks are inspired by movement, form, structure and materials. He established his signature style by juxtaposing vibrant colours with black and white and continued on this quest to remain at the cutting edge of art.


Rubinstein was successfully selling his artworks at the age of 18 and owned his very own textile company at the age of 25. In 2013, only five years after selling his first work at Drouot, he was ranked 89th among the top 100 French artists by auction revenue.

Two words may best sum up Patrick’s career to date in optical art: courage and talent. His faith in himself has never been shaken and today the art world seems to be proving him right. 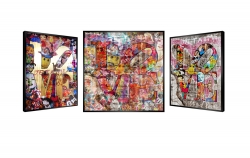