Robert Hodgins was born in Dulwich, London in 1920. He immigrated to South Africa when he was 18. Hodgins is the best known for paintings in which he uses simplified figures to sardonically depict people as self-concerned, lacking conscience and infinitely unaware of their own fallibility. For the last 15 years he had also experimented with printmaking, using the medium to express a range of satire, illustrated in his collaborations with Deborah Bell and William Kenbridge. Hodgins has been included in various group exhibitions in South Africa and internationally. 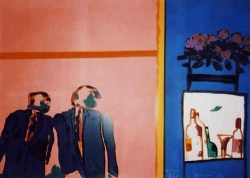