Yaacov Agam decided, in the 1950's, that art could be more than a spectator sport. He created various "tactile paintings", meant to be handled, that added to sight the elements of touch and sound - and produced a unique user experience each time. Later works are purely visual - with a twist.

His Op-ish grids full of colorful gradients, given the moniker "Agamographs", seem to change with every movement of the viewer's head. Agam is credited with being a founder of the Kinetic movement. 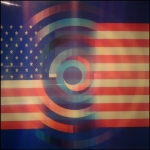