At the age of 19, Blomkamp was awarded the commission to make one of the (then) largest Stained Glass windows in the world. Although primarily a painter, Blomkamp spent the following 20 years producing a spate of large, modern windows for churches, homes and large corporations.

Since 1993, he has concentrated exclusively on his paintings.

The Elegant Travels of an Atomic Warrior 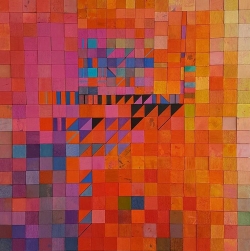