Bernard Buffet was born in Paris in 1928, spending most of his life working in France. He is known for his expressionist paintings above all, but he was also a deft producer of lithography, engraving, sculpture, book illustration, and set design. Buffet's body of work exceeds 8,000 paintings and prints. His work is held in many prestigious collections worldwide from the Vatican to Paris's Museum of Modern Art and Pompidou, New York's Museum of Modern Art, and the Tate in London. Buffet's work depicts the sheer brutality and existentialist mindset of post-war Europe. His figures are often angular and emotionless. The melancholic expressionist tone of his work has often been likened to painters Francis Gruber and Georges Rouault. 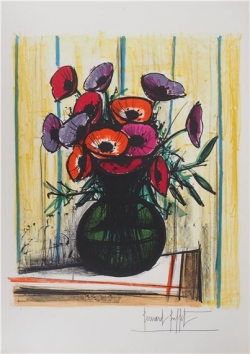