Daniel “Stompie” Selibe was born in Soweto in 1974. He trained in art therapy at The Art Therapy Centre in Johannesburg in 2001.

Music and images are key features in Stompie Selibe’s works of art – most of which are concerned with a desire to discover the ‘unknown’ and the possibility to express, if not touch, that which resides in the remote realm of a human’s ‘inner being’.

What seems to be at the center of Stompie Selibe’s quest is a creative investigation of mystery – he is after the potentiality of a curative wonderment. Stompie Selibe’s work sensibly speaks about healing through art, where the subjective undertaking of art-making is considered as an eternal mission necessary – not only to discover but most importantly – to excavate and liberate the obscure interiority in the life experience of being human in the world. 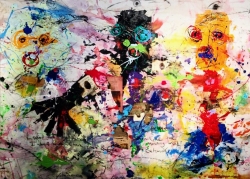