In his early "black paintings" Stella exhibits the precision and rationality that characterized minimalism, employing parallel angular stripes to emphasize the rectangular shape of his large
canvases. Later examples of his work stress color in decorative curved motifs. In the 1970s and 80s, Stella abandoned the studied, minimalist aesthetic in favor of a more improvised, dynamic, and dramatic idiom in mixed-media. During that time he abandoned flat paintings and instead created large, jutting, multipart, three-dimensional painting-constructions that often incorporate
bright colors, enlarged versions of French curves, and lively brushstroke patterns.

Throughout his career, Stella also has been a prolific printmaker. The Whitney Museum, New York City, has several of his paintings, and his works are included in numerous museum and corporate collections worldwide.

A Hungry Cat Ate Up the Goat, Illustrations After El Lissitzky's Had Gadya 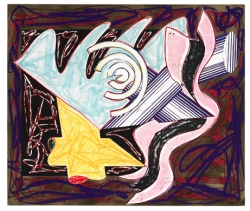 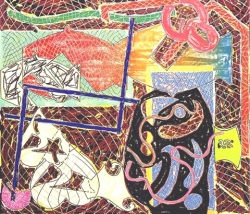 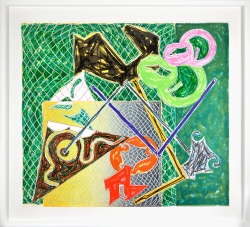